Injured UP prof found in police custody in Davao Oriental 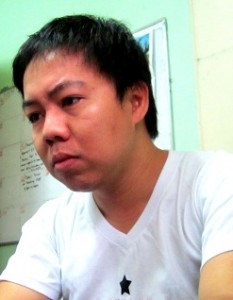 A physics professor from the University of the Philippines (UP) who was reported missing after conducting a study in an area affected by Typhoon Pablo in Davao Oriental was found early Thursday morning in Mati Provincial Hospital under police custody, reported Davao Today.

Juland Suazo, Panalipdan (Defend) spokesperson, also confirmed to Pinoy Weekly that they and fellow UP professors located Prof. Kim Gargar in the said hospital under the custody of the Criminal Investigation and Detection Group (CIDG).

Gargar reportedly sustained a fractured leg and has injuries to his head when located by Panalipdan and his fellow professors.

Davao Today reported that inquest proceedings were filed by the police against Gargar in a Mati court for charges of multiple murder, illegal possession of firearms and violation of the gun ban by the Commission on Elections.

The Davao-based news site also reported that the UP professor was injured in Aliwagwag Falls in Cateel when he was found by elements of the 67th Infantry Battalion of the Philippine Army. The soldiers were reportedly in pursuit operations against guerrillas of the New People’s Army.

Gargar and a companion, Restita Miles from Rural Missionaries of the Philippines, went missing Wednesday, October 2.

The professor was conducting a study in the forested areas in Cateel. According to Panalipdan, Gargar’s study was in preparation for a rehabilitation program in the area sponsored by Balsa Mindanao.

Aside from being a UP professor, Gargar also has a column for Pinoy Weekly, titled “Gulong ng Buhay”.

The Samahan ng Ex-Detainees Laban sa Detensyon at Aresto (SELDA), an organization of former political prisoners today demanded the release of Alison Alcantara, 52, a political prisoner who is confined at the New Bilibid Prison Hospital for almost a week now.

According to Dr. Edelina dela Paz, vice-chairperson of Health Action for Human Rights, an organization of health professionals, health workers and students rendering medical services to victims of human rights violations, who visited Alcantara yesterday at the New Bilibid Prison Hospital, Alcantara is suffering from uncontrolled diabetes with complications of hypertension and infected wound in the left foot.

“Alcantara was among the three political prisoners in Cebu who were released in 2004 when the GRP agreed to release 32 political prisoners as part of confidence-building measures during the 3rd round of peace talks with NDFP in Oslo, Norway. Alison was formerly detained at the Cebu Provincial Detention and Rehabilitation Center in 1996 to face trial for “murder, double frustrated murder and illegal possession of firearms all criminal charges to hide the political nature of Alison’s case. He was re-arrested on 5 November 2010 on the same trumped up charges,” said Jigs Clamor, SELDA national coordinator.

Alcantara is one of the more than 50 ailing political prisoners in the country languishing in prison at present. Under the Aquino regime, there are more than 400 political prisoners all over the country. Of these, 326 were arrested and detained during the Oplan Bantay Laya of the former Gloria Arroyo regime. In the three years of the Aquino regime, on the other hand, 293 were arrested and detained under the counter-insurgency program Oplan Bayanihan.

“We demand the Noynoy Aquino government to direct the immediate release of all political prisoners especially those who are sick. There is no other best prescription to get rid of their illnesses but to release them immediately on humanitarian grounds. For as long as they remain in jails, their illnesses would only worsen given the rudimentary and harsh prison conditions,” Clamor concluded. ###

The continuing persecution of peasant activists who are struggling for their right to the land they’re tilling is outright condemnable. For months, the peasants of Brgy. Cantipay, Carmen, Cebu have been frustrating efforts of the town mayor to fence off their farm lots. In the entire time, they have withstood goons and police sent out by local government to quell their opposition to the illegal fencing.

Armed only with the legitimacy of their cause, they stood firmly in protesting the abuse of authority amidst partisan display of police might by the local executive. To highlight the justness of their cause and firmness of their resolve, the Cantipay Farmers’ Association (CAFA) filed administrative complaints against the mayor before the Office of the Ombudsman on July 10, 2012. While harboring no high hopes on our reactionary courts, the peasants would like to demonstrate that they would not cringe from whatever arena their struggle would take them in defense of their rights.

In reprisal, the local police lodged trumped up charges of theft against the poor peasants. Without due notice, they raided the home of Erlinda Into, chairperson of  KMP-Cebu and CAFA, and arrested her and her husband Leonides, a member of CAFA, on July 24, 2012 at about 12:30 PM. Not satisfied yet, they would file additional charges of illegal possession of firearms and direct assault against the hapless victims who are already penalized to languish in jail due to the high cost of bail recommended by the police.

Such is the bleak picture of how rights of small farmers fare in the agrarian front. Reeling from the bastardization of justice in the mass arrest of peasants in Hacienda Gantuangco in Aloguinsan, CARP, or what is left of its tattered self,  is battered by another wave of agrarian conflict in Northern Cebu. Here is another CARP-covered area bound to be swept down the drain.

In instances such as this, reality exposes who is the real “boss ko” of the present dispensation. For while Noynoy bragged in his SONA to distribute all CARPable areas, he is not lifting a finger to help the farmers; but is allowing the landlords to have their way through his inaction.

In instances such as this, motherhood statements are clearly not what is needed, but clear action favoring the poor and marginalized farmers.###

POLITICAL PRISONERS in the PHILIPPINES – Maricon Montajes and Batangas 7

On June 3,2010, a raid was reportedly conducted in Taysan, Batangas at 4am in the morning by the 743rd Combat Squadron of the Philippine Air Force based in the area. Maricon C. Montajes, female, 21 years old student of the University of the Philippines (UP) taking up Mass Communication major in Film, was wounded in the forehead and was brought to the PAF Hospital. There were two other youth who were allegedly companions of Maricon namely Ronilo Baes, 19 year old, from Batangas and Romiel Cañete, 22 years old, from Diliman Quezon City. Following the raid was the filing of charges against the three youth with frustrated murder and homicide, illegal possession of firearms and violation of gun ban. Since then, they have been detained at Batangas Provincial Jail. A total of 7 political prisoners currently detained at the facility today.

For more information on the campaign to Free Maricon Montajes and all political prisoners, please visit http://www.facebook.com/taskforcefrEEDOMand http://www.freeacosta.blogspot.com